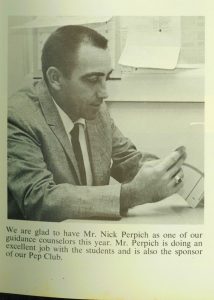 Father, older brother, counselor, teacher, coach and part-time physician. These were all roles ably played by Nick Perpich who faithfully and lovingly served the students at St. Augustine High School for 39 years.

Nick Lewis Perpich, was born June 13th, 1931 in Welch, West Virginia to father, Milan Perpich Sr. and mother, Nellie McKay. Nick passed away peacefully at his residence in St Augustine, FL on June 20th, 2020. He is survived by his wife, Lucille Stiltner Perpich, and his son, Nick Milan Perpich (Kim) and two granddaughters, Emily and Abby all of St. Augustine. Nick was a veteran of the United States Army and served during the Korean War. After his service, Nick attended Morehead State University on a football scholarship where he earned his bachelor’s degree in physical education. He later earned a masters degree in Education at Morehead State.

Father, older brother, counselor, teacher, coach and part-time physician. These were all roles ably played by Nick Perpich who faithfully and lovingly served the students at St. Augustine High School for 39 years. Over the course of his career, Coach Perpich built championship teams, but more importantly, he helped mold kids into strong, confident men and women who went on to lead satisfying and productive lives. He was always generous with his time, advice, and even his financial resources when needed. Many of Nick’s students had their feelings soothed by his wise counsel, or their sore throats swabbed by some red stuff he kept in his office for just such occasions. Coach Perpich started the tennis program at SAHS in 1968, and in 1989, he was honored as Tennis Coach of the Year by the Florida Star Conference.

Coach Perpich also worked with the County Recreation Department for 55 years where he taught and coached thousands of local citizens of all ages how to love sports, particularly the game of tennis. In 2015, in recognition for his outstanding service to the community, Nick was honored with the J. Edward “Red” Cox Award presented by Flagler College. Although 84 at the time, he said he still wasn’t ready to give up his tennis lessons. “Dying is easy,” he said. “You have to work at living.”

News of Coach Nick Perpich’s passing touched off a series of texts and email exchanges among his former students and players who shared some of their favorite memories of the things that made this man so special. Words like friend, mentor, role model, kind, caring, compassionate, humble, and professional were used to describe him. But the one term that perhaps best describes Coach Nick Perpich might be beloved. In whatever capacity, Nick’s friends, colleagues students, and family were blessed to have had him in their lives. A celebration of Coach Nick Perpich’s life will be held at a later date when conditions permit.

If you would like to make a memorial to Coach Nick Perpich, click here, on payment screen please click on “write a note” and enter “Coach Nick.” Then complete the donate form. Your contribution will go into the “Jackets Forever” Endowment Fund which is used to provide SAHS students with college and trade school scholarships.